I have wanted to visit Saint Marc sur Mer for a long time. For many years before I’d ever heard of it in fact. The reason is Jacques Tati’s film Les Vacances de Monsieur Hulot which is one of my favourite movies. One of the very many reasons I love this film is its quaint and idyllic seaside setting. For years I wondered where it was, trying and failing to locate it on a number of occasions. With the advent of the interweb, and the mighty Internet Movie Database, I at last learned that it was filmed in a place called “Saint-Marc-sur-Mer, Loire-Atlantique, France”.  Job done you may think, you’d be wrong. 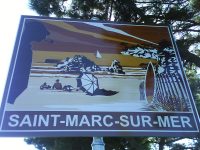 St Marc was too little to appear on my maps and it was several years before the town had any internet presence that I was able to find. But finally, with the aid of Google Maps and the website of the Hotel de la Plage, I found it! Apparently a suburb of St Nazaire and easily accessible from Paris. Hurrah!

It felt wonderful to be there at last.  It’s such a sweet little place and they are obviously very proud of their connection to Hulot. As well the glorious and loving statue overlooking the ‘Plage du M. Hulot’ and the stylised images adorning the Hotel, Hulot features on the road sign at the entrance to the village. The local council building even stands on ‘Place Jacques Tati’. 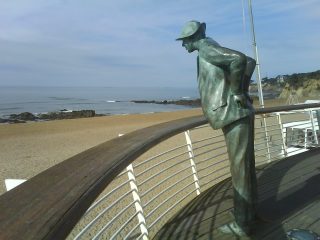 The statue is a life sized (or perhaps slightly larger than life) representation of M. Hulot in a characteristic pose. It stands on a beautiful new structure which forms the promenade. It pleased me greatly to notice that when people stand looking out to sea they stand next to Hulot more often than not.

Something else which pleased me was the soundscape of the place. The crash of the waves against the shore, the birdsong, the cries of the happy holiday makers. It was the soundtrack to the movie – which is largely without dialogue. I could almost imagine I was in the film – except for not being in black & white of course.

The last part of my trip, particularly, was une catastrophe of Hulot-ic proportions – I missed my plane! Nobody misses planes, especially not when they are sitting in the airport departure lounge. In my defence, at no point, from the moment I sat down in the lounge (at least an hour and a half before departure) until the time ‘Edimbourg’ disappeared from the departures board – at no point during that time did it say “Boarding”. However, ‘Boarding’ was, apparently, exactly what was happening. I can only imagine they were calling for me but the announcer had such a ridiculously tiny and breathy voice I couldn’t understand a word she said – in english or french.

So, the plane left without me and I spent the next hour rushing up and down the airport looking for another flight home. Air France had a flight to Edinburgh leaving at 8.30pm but the available seats were pretty expensive. I considered my alternative: I could try finding somewhere in Paris to stay for the night then fly out in the morning but that would involve a lot more running around with no guarantee I wouldn’t end up spending almost as much anyway. I took the ticket.

Next I had to wrest my bag from the clutches of easyjet – a task accomplished with considerably less pain than I imagined. Then off I did trot, a mile or so through the airport to terminal 2E (I’d been in 2B). It was like another world. Spacious and airy with comfy seating and friendly – I repeat, friendly – staff. I was even joking with a couple of security guards!

With only a few minor mishaps – into which I shall not go at the moment – I made it to my gate in plenty of time. I sat facing the gate, nervously watching the staff in case anything changed. Anxiety aside, it was a lovely place to wait: natural lighting, elegant shops and comfortable chairs. I sat in that huge, beautiful, ikea-panelled tunnel of a building, exhausted but happy to be going home.